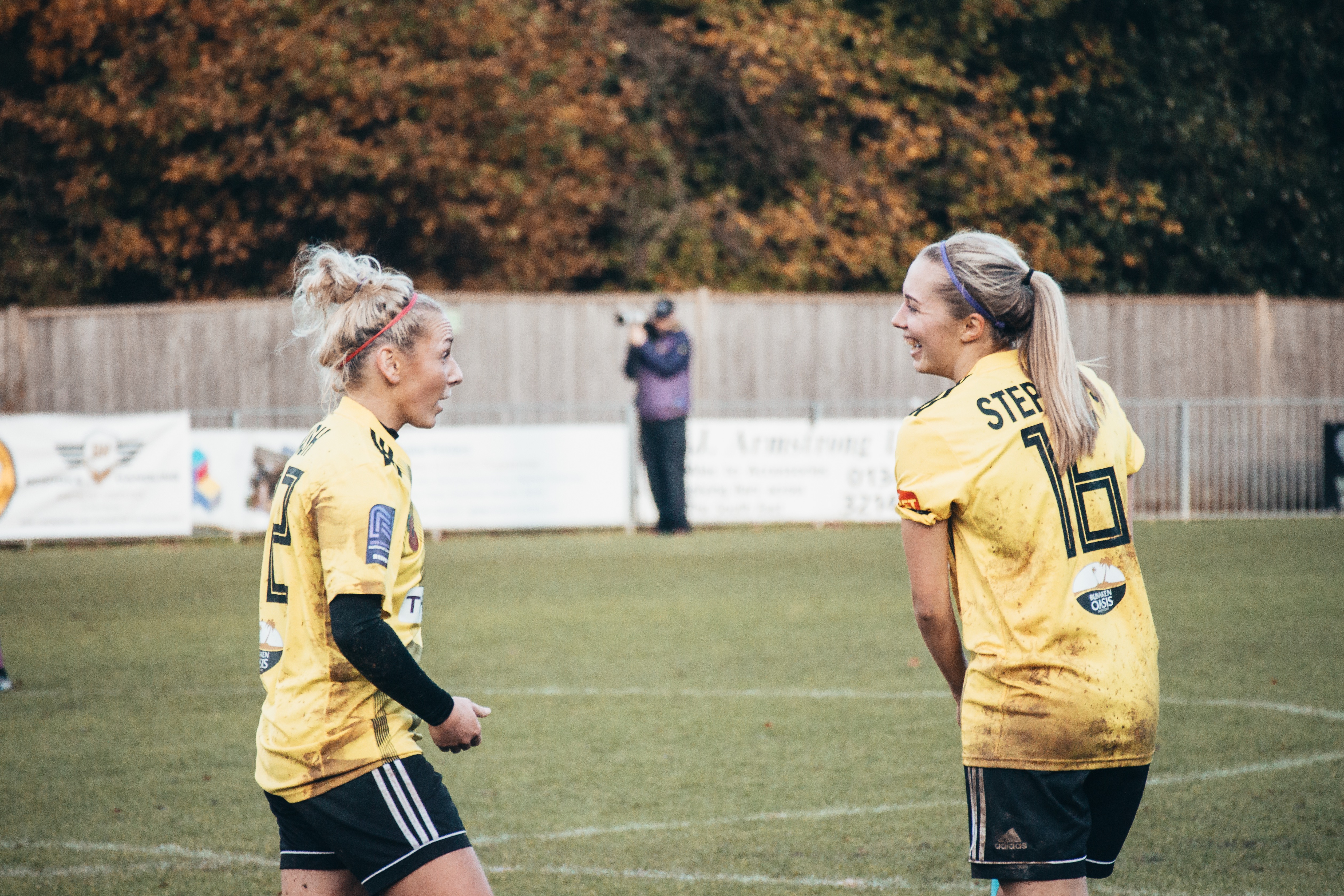 After spending a number of years on the south coast with Portsmouth and Chichester City, Tash Stephens decided that a change in scenery was required and made the move to Crawley Wasps. The Sussex side gained promotion to the National League South as champions of the National League Divison One South West. Wasps came into the season with the good reputation but few would have expect them to be challenging at the top of the division. Tash has been ever present in this campaign, making eighteen appearances, more than anyone else in the squad. I have been fortunate enough to catch up with Tash, who is also one of the Since 71 sponsored players this season.

Could you tell us about yourself?
I’m actually from Somerset and yes, I do have a combine harvester! I went to Uni at Brunel in Uxbridge, after graduation, as jobs in football are pretty hard to come by in Somerset, I had to look further afield and ended up in Portsmouth and have stayed between there and London ever since.

I’ve been a Man United supporter since I first got into football, I think I was a bit in love with David Beckham. But as you can imagine there’s not been too much to support for the past few years.

I play on the wing for Crawley Wasps, and football is a huge part of my life,  but I’ll always be a country girl at heart.

Who was your biggest footballing inspiration while growing up?
Beckham got me into football, but I idolised Ronaldo from the moment he signed. I remember watching him on his first game and absolutely falling in love with the way he played and all his tricks. I always used to copy his boots too which started my love affair with green boots. Still shocked I’m not wearing green boots this season to be honest.

I’ve been lucky with personal role models as I started playing relatively old. I had a primary school teacher who made the boys play with me! I was in a really small village school, but the boys and local coaches really took me under their wing and let me be one of them.

Could you tell me about your experience at youth football?
I actually really struggled at youth football. I was often told that I was too small to play, and I started playing late so was quite far behind other players my age. There was a shortage of teams for my age group about, even in boys teams! So I had to move around quite a lot and play with and against girls older than me.

A particular lowlight was when I didn’t get back into the Somerset Centre of Excellence, I was devastated at the time, it took four years before I played for Somerset again, and that was in their U18s squad.  Those years were probably the best for my development though, as I learnt the value of working hard and getting kicked around a bit!

How important was your time at Portsmouth in your development?
Pompey was absolutely massive for my development, I’ll always be thankful for Perry Northeast and Jason Campbell taking a risk on me there as they gave me my first taste of tier three football. I had just joined a title-winning team and I was completely unknown. All of a sudden I was playing alongside the likes of Quinny, Kempo and Molly who are amazing and I couldn’t just expect to play like I probably had done before. It gave me the biggest lessons in how to earn my place in a team, and unfortunately for me, considering my dislike of the gym, made me understand that I needed to bulk up (I still do), and the commitments and sacrifices needed to get to the next level.

What can you remember about your first team debut with Crawley Wasps?
That was all very surreal, I dislocated my knee and broke my kneecap during preseason so was expected to be out for ages! All of a sudden I was cleared to play, I think I’d done one or two training sessions with the girls and then was starting on the Sunday.

It happened quickly and was so unexpected but the girls, manager and coaches were so supportive with me throughout and on the day, they made it easy for me to slot in.

What I do really remember is how tired and unfit I was! Other than that Sams absolute banger in the first half, and of course I was happy to get a goal myself. But most importantly was the win against such a tough Plymouth team. It was a result that I think made people look up and take notice of us.

How do you balance your football and your day job?
It’s hard work! Especially going into the office on a Monday after a bad game, but they’ve got used to putting up with a bad mood after a bad game and my various aches/pains/limps. I work for Palace for Life, the charity of Crystal Palace FC, where we do a lot of work with young south Londoners to give them brighter futures, especially focusing on the recent crime epidemic. They are obviously football orientated, so appreciate when I may need to leave to get to a match or training.

I’ve also started up my own little side project, helping people improve their football. I felt growing up I had to teach and coach myself a lot, so am really passionate about giving people opportunities that are sometimes hard to come by. A lot of what I do is online-focused, where I create individual football training plans for people and help to improve their lifestyle to give them the best chance of ‘making it’.

Between these, I don’t have a lot of spare time, obviously you want to be able to commit to training as close to a professional as you can, but have to find the balance with earning enough to live on.

You are currently sitting top of the National League South but with Watford breathing down your neck, what is a realistic target for the season?
Before the start of the season we’d have said top three is our realistic goal, considering we were a new team in this league this probably was a bit optimistic. If you said we’d be at the top in February we would have bitten your hands off!

Now we’re top I think that changes it bit, we have standards for ourselves and each other and don’t want them to drop. This means I don’t think we can now just settle for top three and instead need to keep pushing further to finish as high as possible.

With it being so tight at the top are you feeling more pressure going into each game?
Of course there’s pressure but I wouldn’t say it’s increasing with every match. From the start of the season we’ve had an attitude of taking, and looking at, one game at a time. All we can do is focus on doing our job week in, week out, and trust that we’ll end up wherever we deserve to finish.

This is something that has been really ingrained in me this season, as at Chichester last year we were in the fight for the title for much of the season, but it’s very difficult to not start looking too far ahead and start dropping points.

At Crawley, we’ve got so many girls who have experience winning this league, other leagues, or playing in the league above, that we’re very aware that there’s still a lot of games left to play, and there are no easy games in this league.

What are your personal targets for the rest of the season?
Smithy and Matt at Chichester City taught me so much about taking the game by the horns a bit more and being more dangerous on the ball, even when I’m not getting it much. It’s something that I’ve really tried to implement this season, especially as on the wing you can get isolated at points.  So that’s probably my main personal focus this season.

Other than that I just want to win and will help the team to do that in any way possible! I’m a terrible loser, so a personal target will be to win as many games as possible in the league, and also winning the county cup again wouldn’t go amiss either!

We are very pleased to be your sponsor for the season. What does it mean for you to receive sponsorship?
Yes, thank you for picking me! Sponsorship means everything for a player, at Crawley we don’t get paid or expenses, so everything comes out of our own pockets. Sponsoring a player gives us the financial support which means we don’t have to pay for the kit, minibus to games, contribute towards training ground hire and registration fees. Without it I think several of us would struggle to be able to afford to play.

Personally I’ve always had a really good relationship with my sponsors, and they’ve become friends. Having a person or people willing to support you means a lot, and it lets you create a special bond between players and fans.

Some sponsors do it for different reasons, and I try to recognise that. For example some companies sponsor players to increase awareness of their brand, especially through social media. Clubs also massively support sponsorship, showcasing them online and in programmes. Others do it purely for a love of football. I and other players, like to recognise the reason that someone sponsors us and we try to repay them the best we can.

I’d urge anyone who has previously thought about sponsoring a player to get in touch with their local club. Several teams do half a season sponsorships or let you pay in instalments.

I know that you’re a big Harry Potter fan, which house would you be in and why?
This is a very important question! Of course, I’m going to have to say Gryffindor – all the best people are there!!

“Determined, daring and adventurous” – I’d like to think they could sum me up (yes I got that from the Harry Potter wiki!). Having said that, I did say I want to win at all costs – so maybe I’m a Slytherin at heart ha!

It makes me laugh that I could achieve anything in football, but my love for Hazza P is most likely the legacy I’ll leave behind!