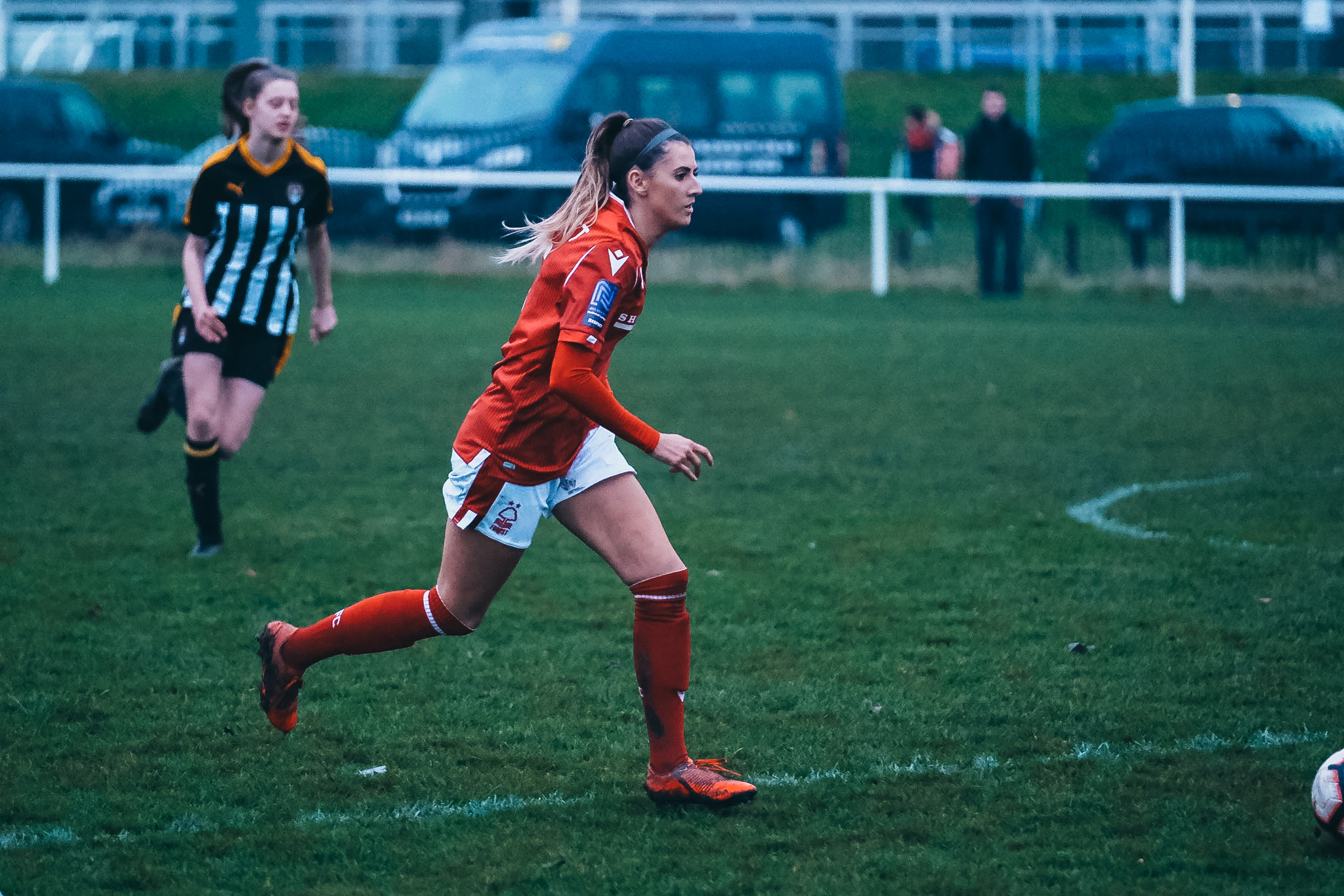 National League North side, Nottingham Forest are currently among a group of clubs waiting to pounce should league leaders Sunderland stumble. One of the most influential characters within the squad is full back, Georgia Hewitt. I’ve been fortunate to spend some time learning about her influences, growing up in Egypt, her time at Sheffield Hallam Uni and playing with Manchester United‘s Jess Sigsworth.

Could you tell us a little bit about yourself?
My name is Georgia Hewitt, I am a Derby girl who grew up in a holiday resort of Sharm el-Sheikh in Egypt and I’m a Nottingham Forest fullback.

Who was your biggest footballing inspiration while growing up?
Growing up in Egypt I didn’t have much knowledge of the women’s game in England and I don’t think there was much noise around the women’s game either in terms of on the tele or on social media.

From watching the men’s game a lot I used to idolise Steven Gerrard, I used to have him on the back of my England shirts and made sure I could watch him any chance I had.  I don’t think it was until Youtube started to become a big thing and I started watching the US women’s national team videos that I found my first female football inspiration who was Amy Rodriguez,  absolute goal machine. I don’t think I learnt much from watching her though with me being a fullback now

Who has been your biggest fan in football?
I’d definitely have to say my parents, they’ve supported me in anything I’ve done but any chance they get to watch me play when their home from Egypt they’ll always be there whether it’s sunny at home or absolutely baltic away to Sunderland. They’ll always follow the game from Egypt and ring me before and after to wish me luck and see how I’ve done, sometimes you’d think I’m Ronaldo with how much my mum bigs me up then it’ll be the other way round with my dad who’ll tell me what I could have done better and advise me on my game but nether the less they are definitely my biggest fans.

Could you tell me about your experience at youth football?
To be honest with you, I’ve never really experienced youth football.  Due to my upbringing, my youth football was either playing on the beach with my mates or using palm trees as my targets when I was practising, occasionally we’d sneak into a neighbouring hotel and have a kick about against the tourists on their new 3G pitch or have a game against the hotel workers. It wasn’t until I was about 16/17 when I first started getting coached at the Liverpool international academy in Cairo that I started learning the proper fundamentals of football and getting properly coached. I then moved back to England when I was 18 and managed to get trials at Derby County where I joined their reserves as a winger then went to Aston Villa, it was only till the later years at Derby and Villa where I started to really play football and learn 11 aside football.

How important was your time at Derby County in your development?
I am extremely thankful for my time at Derby and to the coaching staff there. I met some life long friends and the club helped me not only develop as a player but as a person.

How does it feel when you come up against Derby County?
I absolutely love it, don’t think there’s a game that pumps me up more. I think due to the nature of who all my family support, I really understand the fixture so I know how much it means to the club, the fans and as well as a player to have the bragging rights for the badge you wear. Obviously, as a player I want to be on that winning side and to win against your biggest rivals is just an amazing feeling. The girls used to take the mick out of the club I supported because a lot of them are forest fans but now nothing really gets said because of the love I have for this club and the amount of respect I have for it. I probably shout “YOU REDS” as much as Lynno our captain and she’s the biggest forest fan going in our team.

What sort of differences did you find between University football and weekend club football?
I think it’s a lot different for some universities as they have links with the clubs and push a lot of funding into the women’s university teams through scholars/coaching etc but I think when I was at university even though we played at the highest level of football we didn’t get much funding compared to other universities so although we took it seriously, we had to depend a lot on our club coaching to help us during our university games and training.

Club football for me was my main team and I used university football as extra to help me on a Sunday, I think that’s the same with a lot of players who play both for uni and club, the priority is always with the club and not the university.

How do you balance your football with the demands of your day job?
It is difficult, I won’t pretend it’s not, I think everyone would love to be on 100k a week and be able to play football but unfortunately we can’t so we do what we need to do. My standard training day looks a bit like this, I’ll leave the house at 7 am to get to work in Leicester, I’ll then drive to Nottingham after work for training where we train till 10, I then drive home to Derby where I’ll get in for about half 10 or 11 dependent on if I have a chin wag after training with the girls. Days where we don’t train I’ll incorporate a gym session or a run so it is long and takes a lot of commitment but at the end of the day I absolutely love it and wouldn’t change it for the world. We have players in our team who travel from miles away and they have a career as well as a family so I completely idolise them and would never complain about having to work and play football. As long as you balance everything and look after your body and your mind, its easy to manage and I had a conversation with our gaffer Andy once about effort and he said something along the lines of if you love what you do then you’ll never complain about it no matter what you have to do for it.

Can you tell me about the move to Nottingham Forest and how it came about?
I wanted to find a new challenge in my football career and a new environment that would help me develop as a player which would find myself getting more game time on the pitch.  It was a difficult decision to make having to leave the club I supported growing up but its one I’m extremely proud of and don’t regret.

What can you remember about your first-team debut with Nottingham Forest?
My first league debut for Forest was one to remember to be honest, I played on the left-wing against Bradford and managed to bag my self a pea roller of a goal so I was happy with my performance.

If Forest could sign any player that you’ve previously played with then who would it be and why?
I’d have to go with Jessica Sigsworth who I played university football with, we’d just get the ball and boot it up top for her to run onto, with her power and speed there was no stopping her and you could always count on her to put the ball in the back of the net. She’s definitely one of the best players I’ve played alongside and she’s making us proud at united.

How are the squad feeling after the FA Cup exit?
We were all extremely gutted after the game and I think we all thought we deserved more from it but at the end of the day that’s football and sometimes it doesn’t go your way. We spoke about the game in our post-match meeting and we all agreed we made silly errors during the game that we need to tighten up on if we are going to put in a performance on Sunday against Boro. Our gaffer always says we have to earn the right to play so on Sunday we’ve got to turn up and give 100% and more to get the win we want. We have wrongs we need to put right from last week and from the last time we played Boro so it should be a good game and one we’re very much up for.

With it being so tight in the league this season are you feeling pressure going into each game?
I think a little pressure is a good thing, as a team we have our own pressure that we add through internal targets and expectations that we want to achieve, this keeps us focused and working hard. We take each week, session by session and game by game making sure we perform individually as well as collectively as a team.  We do look at the table and I’m sure everyone does but we can’t focus on other teams in the league we have to focus on ourselves and making sure we put the performances in to gain the 3 points and achieve our own goals we’ve set.

What is a realistic target for Nottingham Forest to achieve this season?
We’ve spoken about promotion this season and we’re no fools, we know this is a strong league with a lot of strong teams who have the ability to get promoted but we want to make sure we put ourselves in contention for the title and make sure we put ourselves in the mix at the top of the table because you never know what’s going to happen. We can’t forget that last season we were battling relegation and now here we are this season wanting promotion, we just have to make sure we do everything possible to help us finish as high as we can up the table and get the best finish to a season this club has seen in a long time and we’ll be proud.

My targets always remain the same throughout the season and that’s giving my 100% during training and games for my teammates. I also want to make sure I become one of the players in the squad who the gaffer looks at and thinks yes G has got to be in the matchday squad on Sunday. I just want to help get this club where it belongs and that’s in the leagues above.