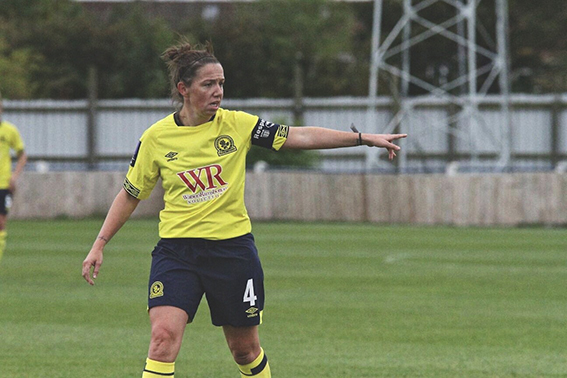 Blackburn Rovers Ladies have been absolutely smashing it in the FA Women’s National League North this season. They have won every game so far and are sitting top with a plus an incredible goal difference of plus 49 goals! Northern Ireland international and club captain, Lynda Shepherd, is a vital cog of the machine that is motoring towards the league title and I have been fortunate enough to have some time with Lynda.

Since 71: Could you tell us a little bit about yourself?
Lynda: My name is Lynda Shepherd, I am 33 and I’m from Sale in Manchester. I play centre midfield for Blackburn Rovers Ladies. This is my tenth season at the club.

Who was your biggest footballing inspiration while growing up?
I didn’t really have any inspirations when I was growing up. I really like Steven Gerrard and the way he played the game. I grew up playing on the streets with my brother and the boys I grew up with, so I suppose if anyone inspired me, it was them. When I went into women’s football I carried with me the way I grew up playing, I’d probably say I am very passionate and feisty when I play.

Could you tell me about your experience at youth football?
I didn’t really experience too much of youth football because I didn’t go into my first women’s team until I was about 17/18 years old, which was Manchester United, where I played right back. I then went on to play for Stockport County in central midfield. That year Blackburn won the league I did really enjoy my time at Stockport, but I wanted to play at a higher level and I then moved to Blackburn and haven’t looked back since. 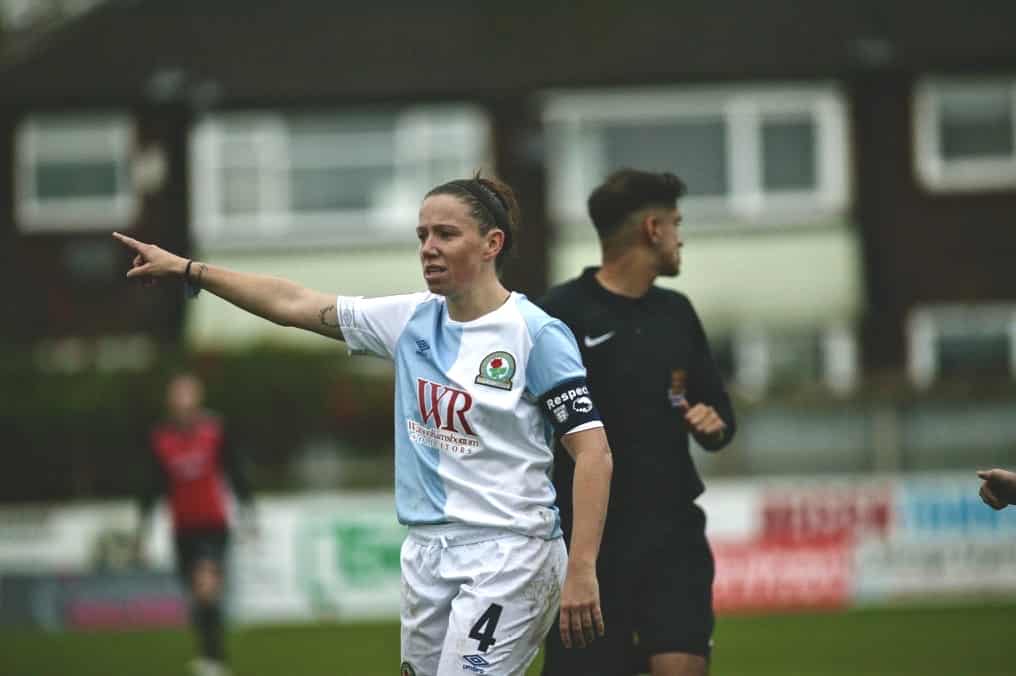 You are currently playing at Blackburn Rovers, what is it about the club that you like most?
I love it at Blackburn, I always have done. It’s where I have created my favourite memories playing football. It’s a great club. We are well backed by the men’s team and we are very much included at the club. Blackburn has a great centre of excellence and I think that shows with the players that they have produced. It’s weird I have played at a few clubs including two Women’s Super League clubs but nothing compares to Rovers. We are like a little family, the atmosphere and environment is just something I’ve never experienced anywhere else.

It has been a fantastic season so far. Based on your current position would you say that anything other than winning the league would be a disappointment?
Of course our aim is to win the league, I would be lying if I said anything else. We have won the league two years in a row, and we have missed out on promotion because we have lost the play-off final twice. That’s our own fault, and the only people I ever hold responsible is us as a group, we didn’t deliver when it was necessary. We are a very humble group and we never look too far ahead, so we just concentrate on winning one game at a time. We have a great team with some really talented footballers. I do believe these players, this club and this team deserve to be in the Championship, but we have to get ourselves there, no one else.

Hopefully the clubs form continues and you are promoted. How do you think the team would get on at a higher level? Would there need to be any changes?
I think we could compete at a higher level; do I think we would win every game every week? No. But I think we could definitely compete. I think the players we have would be able to compete higher, but additions probably would need to be made. This is mainly to get the best out of people, to create competition, which I think can only help people to improve. 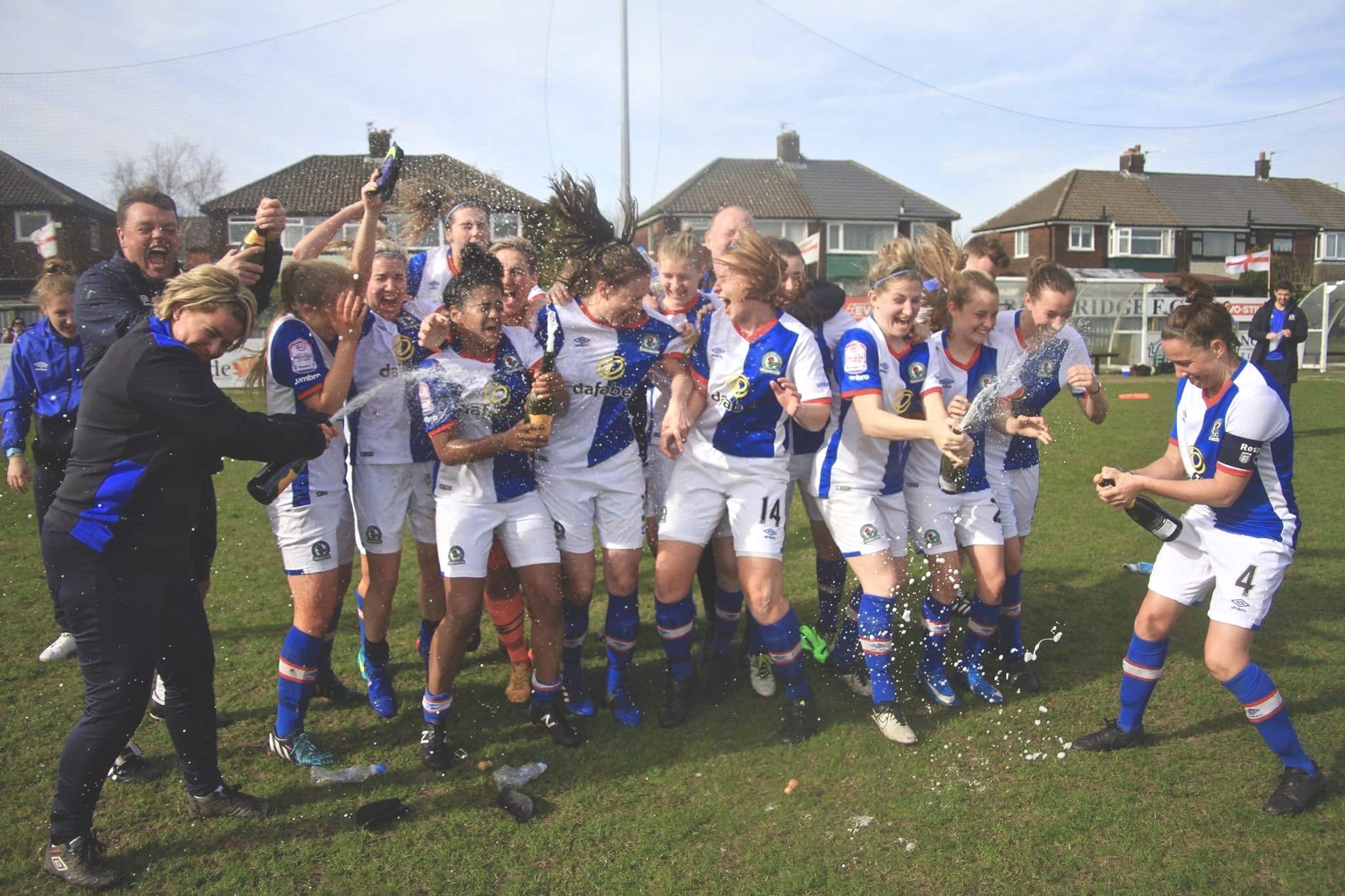 You represented England U21s and U23s but went on to play for Northern Ireland at senior level. Could you tell me about how that decision came about and was it a difficult one?
No, it wasn’t a difficult one really, I competed for England at U21 and U23 level and I think I went to two training camps with the seniors. But with the players that played in my position at that time I was never going to get in the midfield. The likes of Fara Williams, Katie Chapman and Kelly Smith, I was never going to get in ahead of them. Northern Ireland contacted me and gave me the opportunity to go and train with them and I jumped at the chance. I really enjoyed going away with Northern Ireland – the girls the staff, everything was great. I really enjoyed my time there.

What can you remember about your Northern Ireland team debut?
I remember it was in the Cyprus Cup, I went away for ten days with the squad, I had never met them before but they were all very welcoming and made me feel a part of it very quickly. It was against the Republic of Ireland, I think we got beat 3-1, it was so hot. The whole experience of being with the squad in Cyprus was really good, I enjoyed every minute of it.

Do you have a moment within football, at club level or international that you are most proud of?
I’ve had a few great moments. At club level, winning the league unbeaten with Blackburn was a great achievement. It was a long season, but to go unbeaten was something special, that will always stick with me. I loved winning the League Cup last year, as we did it the difficult way. Leading up to the final I think the two previous games went to penalty shoot outs, then we went behind in the final. I scored a penalty to get us back level and we went on to win 3-1. It was brilliant, my family was there too which made it extra special for me. 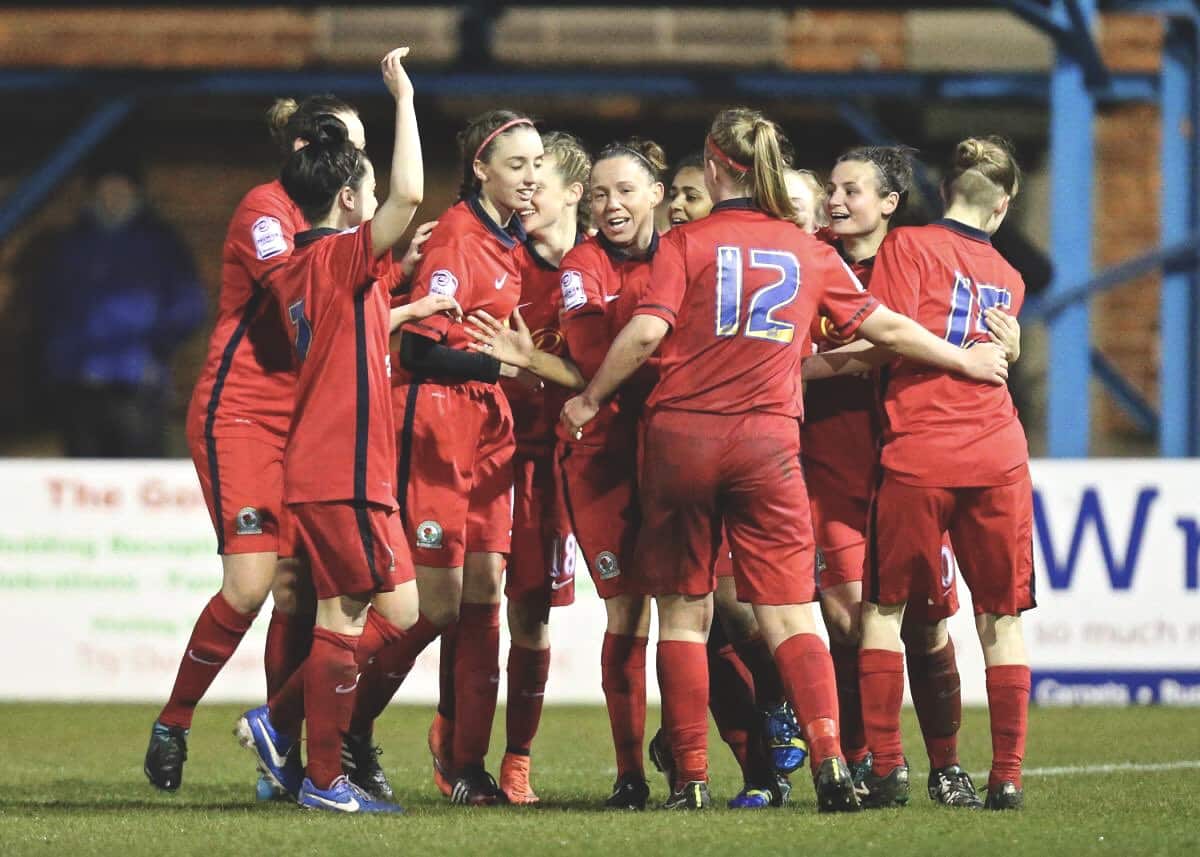 Lynda surrounded by her Blackburn Rovers team mates while they celebrate a goal. Photo: @RoversLadies

Who was the best manager that you’ve worked with in your playing career and why?
Well if I don’t say the Boss I will be dropped on Sunday, so Gemma Donnelly! To be fair Gemma is one of the best managers I’ve worked under because she knows me so well. I’ve known Gemma since I was 19 so she’s seen me grow up. When I was younger I was hard work at times and Gemma has stuck by me. She stands by her players and always wants the best for us and the club. I’ve also worked with some great coaches; Mo Marley briefly with my time at England, she is so detailed, it was a great learning experience. Alfie Wylie is one of the most passionate managers I’ve played for, he is a manager who makes you play for him. Most recently I’ve worked with coaches Scott McNeil and Amanda Goodwin (AJ). Scott is so enthusiastic about the game, he loves it, he is so infectious it rubs off on you. AJ is so technical and detailed it’s great to be around her, she has taken us to the next level as a group, you can see that in our results. 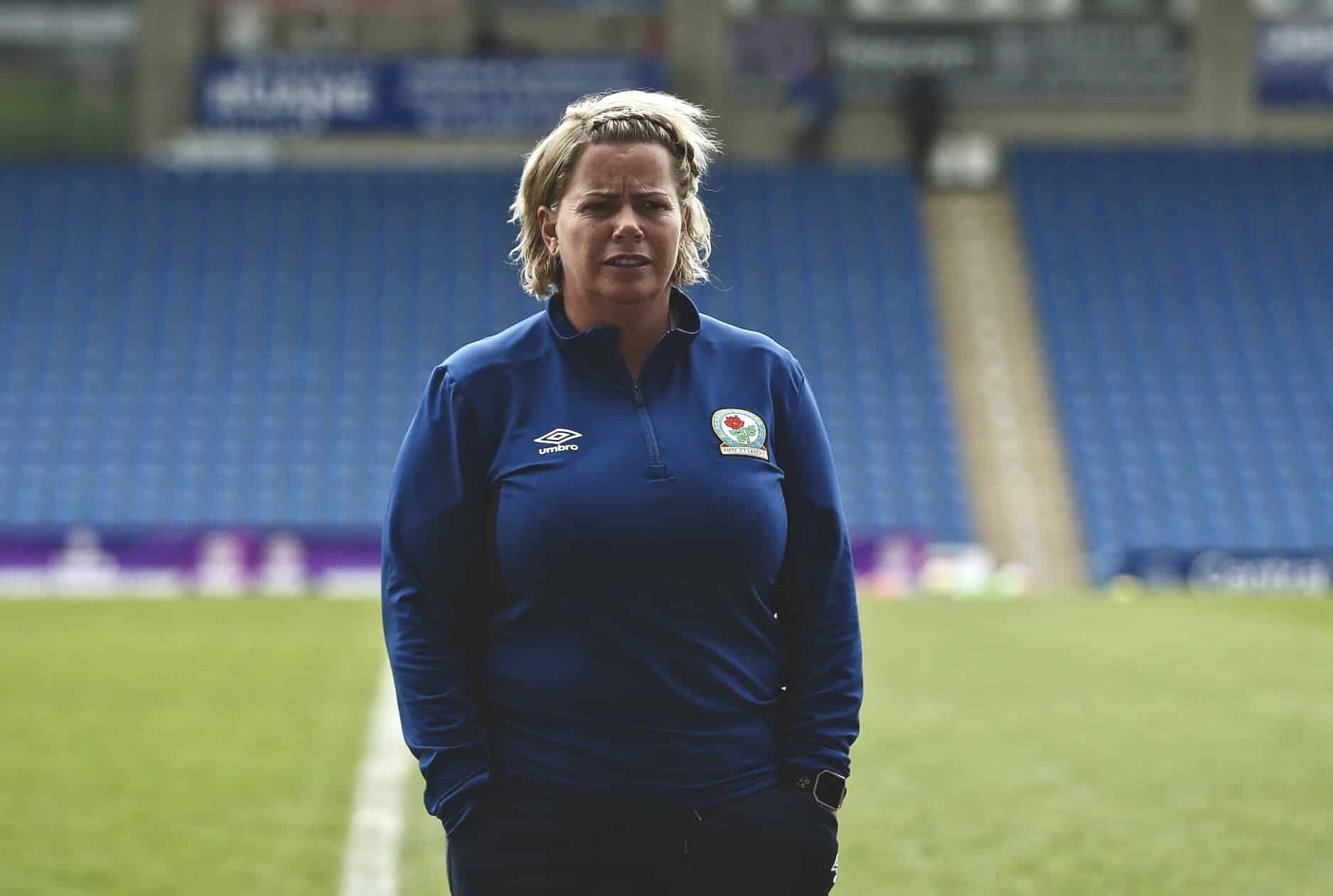 In 2016 you were named the FA Women’s Premier League Players’ Player of the Year. Could you tell me about that season and how it felt to receive the award?
I don’t really remember too much of that season the be honest, I think we finished third, I am not sure, I don’t have the greatest of memories. I got invited to the awards as I was told I was nominated. I wasn’t going to go to the awards because I had something on but Gemma mithered me to go, so I went, my two best friends came too so it ended up being a nice trip to London. It felt great to receive an award I didn’t think I would ever win. I am not really a goal scorer or a flare player so I just felt privileged even being nominated. When they called my name I was so shocked, I literally got up on the stage said thank you to my team mates and the club and got down as quick as possible.

Being captain and one of the most experienced players in the club how do you find working with the younger players?
I enjoy working with the younger players, I try and help them as much as possible. I try to show them in the way I play and train what it means to play for this club and what standards are expected of us. I’ll always take time for them if they need me, as much as I can come across a bit feisty on the pitch, I am completely different off the pitch and would like to consider myself as approachable.

Would you like to get into coaching/management one day?
I used to coach as my day job and I really enjoyed that. I practically coach when I play, because I don’t shut up! People tell me I should coach or manage as my experiences within football would be a shame to just lose out of the game. I am not sure, we’ll see.