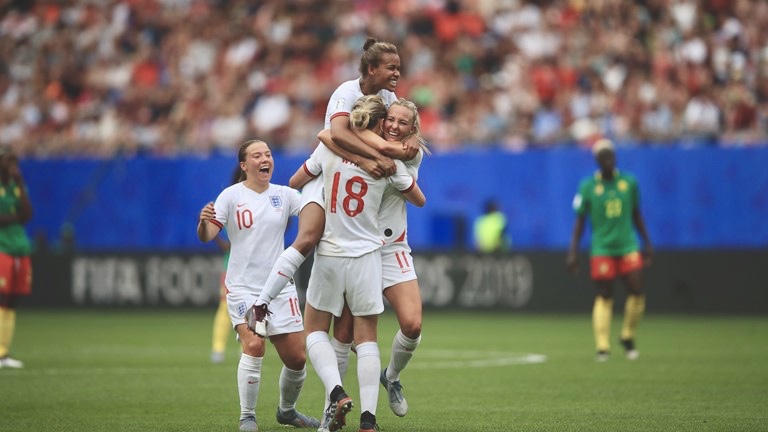 The Lionesses confirm a quarter-finals place after a 3-0 victory over a Cameroon side who twice held up play as they protested after two VAR decisions went against them.

The first talking point of the match is when Yvonne Leuko is issued a yellow for an elbow into Nikita Parris’ face! It is very odd that VAR hasn’t had a look at this one. There was more intent on that than every single one of the handballs which VAR has been given over this tournament.

The referee blows up for a backpass by Cameroon. Possibly a bit harsh! I don’t believe that the defender intended to pass to the keeper but Ngo Ndom picks up the ball.

Much like at the She Believes Cup earlier this year, Steph Houghton scores an indirect free kick. It’s no mean feat as literally the whole of the Cameroon side are stood on the goal line. There was one small gap and Houghton managed to find out. 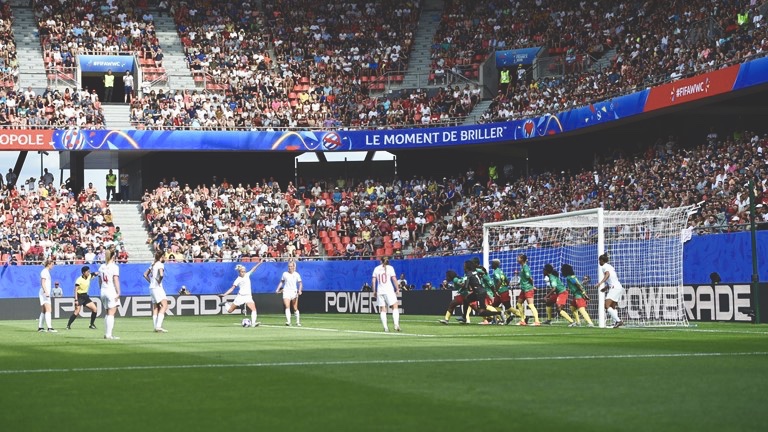 Soon after Toni Duggan takes a short from the edge of the box but her curled effort flies just passed the post for a goal kick.

Apart from the goal, Cameroon played well. Phil Neville’s side were failing to kill the game off and the Indomitable Lions looked to pounce on any errors.

In first-half injury time, Lucy Bronze, threads a ball through to Ellen White, the Birmingham City forward swivels and places the ball into the bottom left corner.

It was all going rather smoothly until the VAR review of White’s goal. It was initially considered to have been offside but VAR correctly rules that White was safely on side. Duggan on the other wasn’t and the Cameroon players halted play while they disputed the decision. The fact that Duggan wasn’t even close to interfering with play didn’t seem to come into the equation. We eventually got back underway only for the referee, Liang Qin, to blow up soon after so everything can calm down a bit. 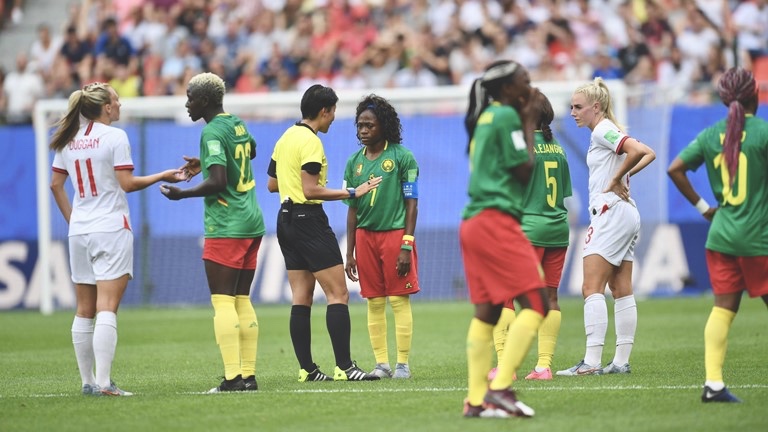 BBC Sport correspondent Jo Currie, who is in the tunnel, is reporting that there are tears in among the Cameroon players who are calling the decision racist. It’s not very nice to hear of the players being that upset but while Liang Qin was struggling to control the game, her decisions seemed to be correct.

After the break, Cameroon surprised a few with a quick goal from Ajara Nchout. The elation quickly turned into despair when Liang Qin signalled for another VAR review. The Cameroon side were a mixture of gutted and furious as play is held up. Gabrielle Onguene was deemed to be in an offside position when she was played in. While in theory, the decision was correct, we are talking 1-2 centimetres at most!

Manager Alain Djeufma and captain Gabrielle Onguene do their best to calm things down so play can continue. Their side pounces on a poor clearance by Karen Bardsley and force Alex Greenwood into an error. Alexandra Engolo goes through with just Bardsley to beat but the England keeper is there to make amends.

Toni Duggan’s corner is converted by Alex Greenwood to put England 3-0 up. The Manchester United Women’s skipper runs unchallenged from the edge of the box and fires in from near the penalty spot. This looked like one straight from the training ground. 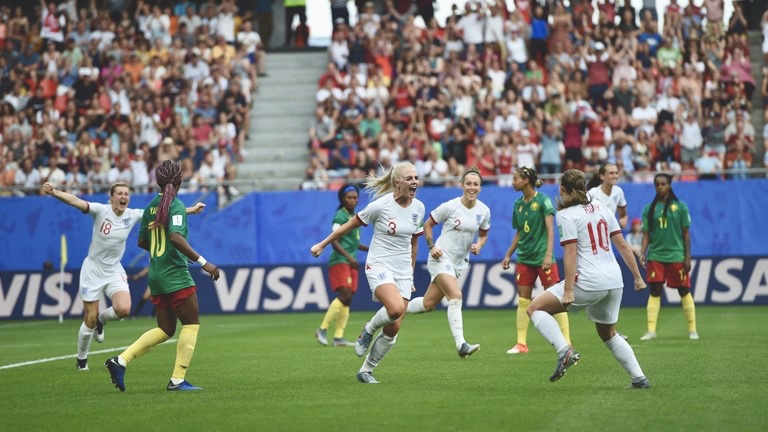 This effectively was the game over as a contest and Phil Neville started to rest some of his starting line-up. Jodie Taylor and Lucy Staniforth come on for White and Jill Scott respectively.

Taylor picked up the ball from a fumble by Cameroon keeper Annette Ngo Ndom but can’t quite turn to shoot. Fran Kirby and Toni Duggan are unable to convert the rebound. In a nice touch, Phil Neville brings on the popular Arsenal player, Leah Williamson, for her first appearance of the tournament. This means that every one of the Lionesses’ squad have all played a part in France.

As the seven minutes of injury time is played out Alexandra Takounda Engolo follows through on Alex Greenwood and stamps on her foot, sending her tumbling at the feet of the Cameroon coach in the technical area. After a VAR review, the referee decides a yellow card is enough. I believe that she bottled it and Cameroon should have finished this tie with nine players after Leuko’s earlier elbow. 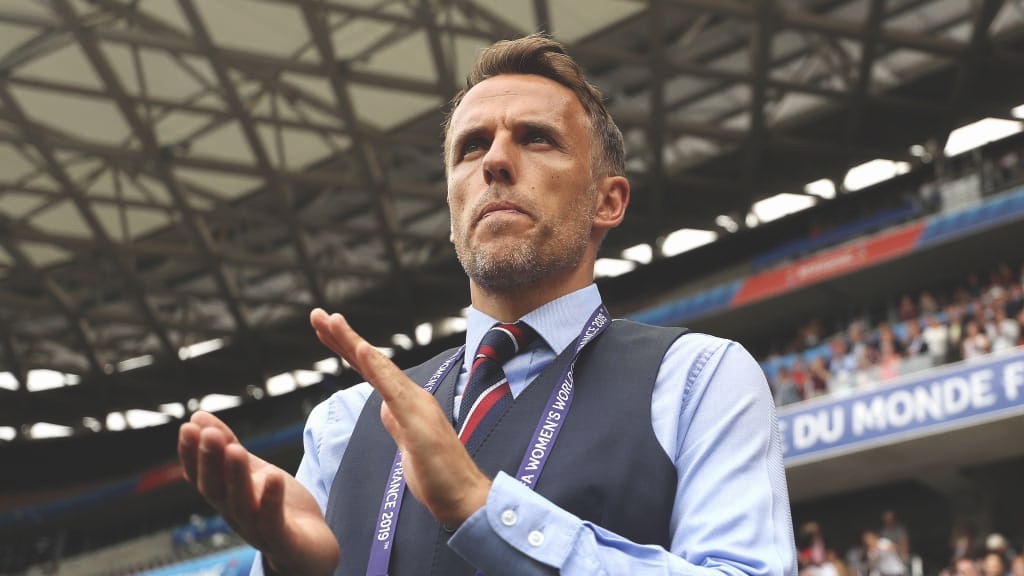 When asked if he enjoyed the game, Neville said, “Not really. I want to stand here and say brilliant things about my players – the way they kept their concentration and some of the quality of passes. But there’s something bigger happening at this World Cup.

“We are trying to promote the women’s game – we’re trying to make it bigger and better. When images like that and behaviour like that goes out world wide, that’s not good.

“Win, lose or draw – I’d never expect my players to do that. You have to accept the rules are the rules, that the referees make the right calls and get on with it.

“I’m afraid today we saw behaviour that was unacceptable on the football field.”

The Lionesses march on into the quarter finals where they will play Norway on Thursday evening.