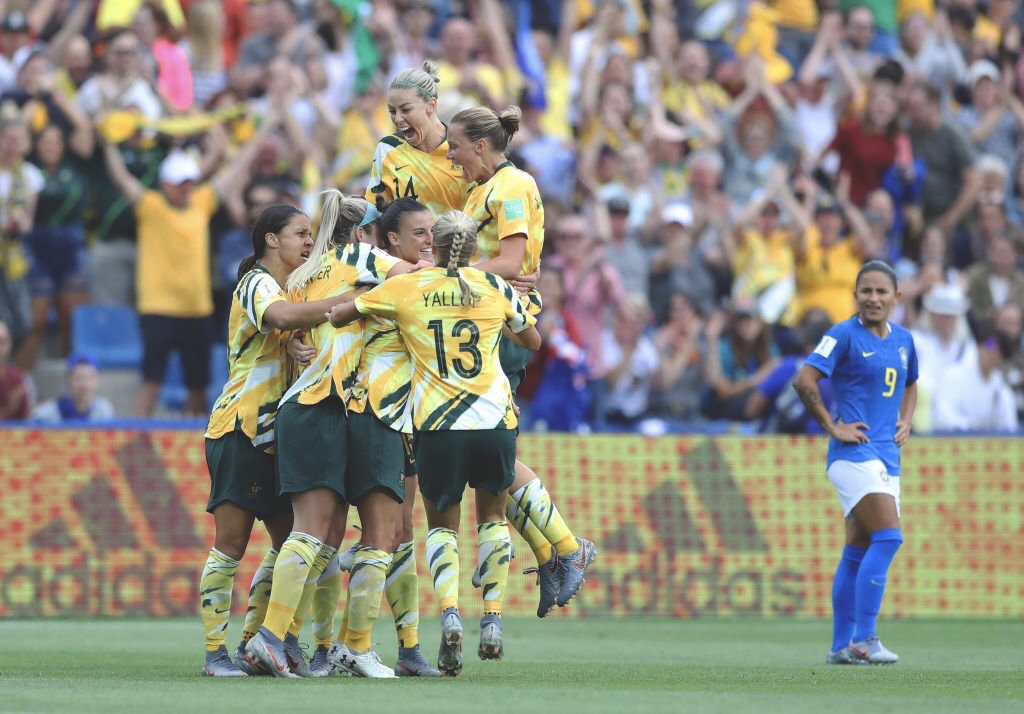 Australia begin the game with a very strong and dominating opening 5 minutes. They see their first shot on goal by Elise Kellond-Knight sail over the bar. On the 10 minute mark Brazil breakaway on the counter and Lydia Williams is called into action twice to save the Brazilian shots.

In the 13 minute, 41-year-old history maker Formiga is awarded a yellow for a tackle on Tameka Yallop, this means she will miss the final group game against Italy.

In the 20th minute Yallop is tripped in the box and a VAR penalty check takes place, however, it is discovered during this check that the ball comes off her hand in the lead up to the tackle, so the penalty is ruled out and a free kick is awarded to Brazil.

Brazil are given the chance to open the scoring in the 25th minute when they are awarded a penalty as Kellond-Knight drags a player to the ground in the box. FIFA Women’s Player of the Year steps up, sends Williams the wrong way and scores for 16th career World Cup goal.

After a very dominating performance from Australia in the opening 25 minutes, Brazil lead 1-0. There is very end to end play for the next 10 minutes with some clever play from Australia to lead Kerr to have her first real shot on goal, however, the ball is held well by the Brazilian keeper.

Brazil then have all the possession and Cristiane finds herself in the box, on the end of a Debinha cross. She heads the ball towards goal and sees it nettle into the bottom corner. Brazil lead 2-0.

With 3 minutes added in the first half Australia push for a goal. In the 45+1 minute a header by Logarzo falls for Caitlin Foord who slots the ball into the net. The score at half time 2-1 to Brazil.

Australia begin the second half one goal down, knowing they need a massive turn around to secure the win they desperately need. In the 50th minute Australia are given a free kick is a promising position, KK steps up but the ball is not met in the box and the keeper manages to push the ball away. However, it only takes Australia another 7 minutes to level. Chloe Logarzos shot from outside the boxes flies straight past the oncoming defenders and into the back of the net.

In the 65th minute Monica heads the ball into her own net and Australia think they are ahead. The flag is up but a VAR check is taken to determine whether a player was in an offside position. After a lengthy check the goal is awarded. Australia have turned it around to lead 3-2. Both teams push for another goal, with a chance for both teams which see the keepers having to make saves.

All the play by Australia with Brazil beginning to struggle to break away. Brazil begin to get desperate and 2 players are then shown yellow cards in the space of 4 minutes; Andressa in the 84th and Luana in the 87th. Brazil’s performance took a downward turn in the second half but they continued to push for the equaliser. With 5 minutes of added time, Australia desperately try and hold on to their lead.

In the 90+1 there possible last-minute penalty shout for Brazil but nothing is given. Australia’s Roestbakken comes on in the final few minutes to make her international debut. The final score 3-2 to Australia as they claim a crucial three points.