If you had arrived at Ocean Park Arena around 12.30 on Sunday 27th November, you’d have been forgiven for thinking there was a football festival taking place. Throngs of young girls in their playing kits, parents and local women’s football supporters had gathered to watch Cardiff City host Keynsham Town in the second round proper of the Vitality Women’s FA Cup.

Scarves and bobble hats were on sale on this chilly November fixture; fans signed up for their chance to win a shirt signed by the squad; and teams warmed up accompanied by music booming across the pitch.

Reaching the second round of the FA Cup meant tensions on the pitch were high in this fixture – this became evident when the game kicked off and challenges started flying in.

The match started as a tough battle in the middle of the pitch, with Cardiff occasionally breaking through to unleash a shot on goal, but nothing to trouble the Keynsham keeper, Charlotte Haynes.

Initially, it looked as though the usually dominant Cardiff would struggle to break down the visitors, but at 15 minutes, captain Cori Williams found a way to evade Haynes’ long reach and drive the ball into the bottom right corner of the net.

Keynsham responded, with Shannon Redhouse breaking through on goal but upon seeing her name up in lights, her powerful shot flew away from the goal. A flurry of shots for Keynsham ensued, though very few found the target. Five minutes after Cardiff’s goal, Gemma McGuinness attempted to equalise for Keynsham but her shot also fired off high and wide.

With half an hour gone, Keynsham’s most dangerous play came from a sustained attack, with intelligent passes on the floor finding their way through the red wall of defence. For a few minutes it looked certain that the equaliser was imminent until eventually the attack was snuffed out by Laura O’Sullivan, who mopped up a shot and distributed the ball high up the pitch, relieving the pressure for the home side.

Only two minutes later, Keynsham found themselves through on goal again, but could not pull the trigger when needed.

Cardiff were determined to add to their lead before half time, but Cori Williams’ header on goal was denied by the crossbar.

As half time approached, so too did Grace Seren who latched onto a through ball in front of goal, but was taken down in the box before she could get a shot off. The whistle blew. The referee pointed to the spot. Penalty to Cardiff. 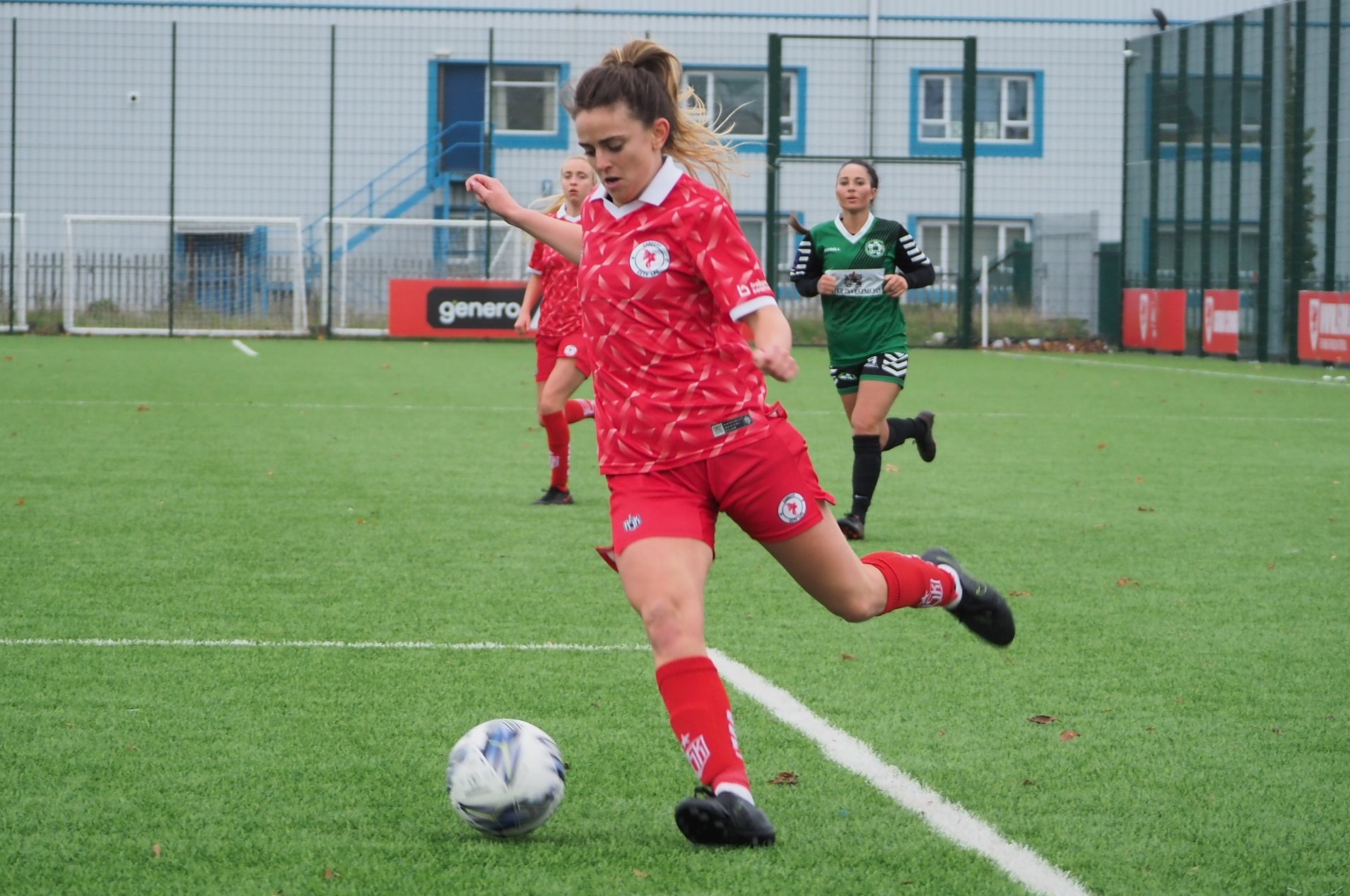 Cardiff’s set-piece specialist, Chloe Lloyd, stepped up and calmly delivered the ball into the back of the net, sending Haynes the wrong way, and sending the teams into the dressing rooms at half time with the Dragons 2-0 to the good.

The second half kicked off, with Ellie Sargent coming on for Ruby Scahill in a tactical decision for Cardiff. The battle resumed in the middle of the pitch.

Ten minutes into the second half, Cardiff won two corners in quick succession. Chloe Lloyd’s second seemed to swerve away from the goal before curling back towards the crossbar. A messy scramble, confusion in the box, and Keynsham headed the ball into the back of their own net.

Things went from bad to worse for the Keynsham defence, as Ellie Sargent seemed determined to make up for spending the first half on the bench for Cardiff. One of the fastest players in the FAWNL, Sargent’s runs down the right wing were so dangerous, slicing through the Keynsham defence with ease and creating more chances for Cardiff. The home side settled into a totally dominant display, reflecting the form they’d carried all season.

With half an hour still left to play, Laura Williams felt the time was right to show the 250-strong crowd that she only scores screamers. Her shot from the edge of the box soared into the top right corner, evading the reach of Haynes and drawing tumultuous applause and delighted screams from the home crowd.

Down at the other end, Laura O’Sullivan had very little to do.  A wild effort from the visitors to claw a goal back was spat back onto the pitch by the crossbar, but other than this attempt there was very little to trouble Wales’ number 1. Throughout the game, it seemed as though the visitors were afraid to test the Welsh keeper, with shots flying anywhere but at the goal.

As the final minutes approached, Cardiff won another penalty. Chloe Lloyd again stepped up and added a 5th goal to the game, with Haynes doing well to get a hand to the ball, but not enough to prevent the goal.

Not content with just the five, Cori Williams found herself in front of goal after some great build up play from Cardiff, and thumped the ball home emphatically to get the Dragons’ sixth of the day, and net herself a brace.

The final whistle blew, and Keynsham bowed out of the competition. Cardiff had swept their league rivals aside with an emphatic performance, and are yet to concede a goal in the Vitality Women’s FA Cup.