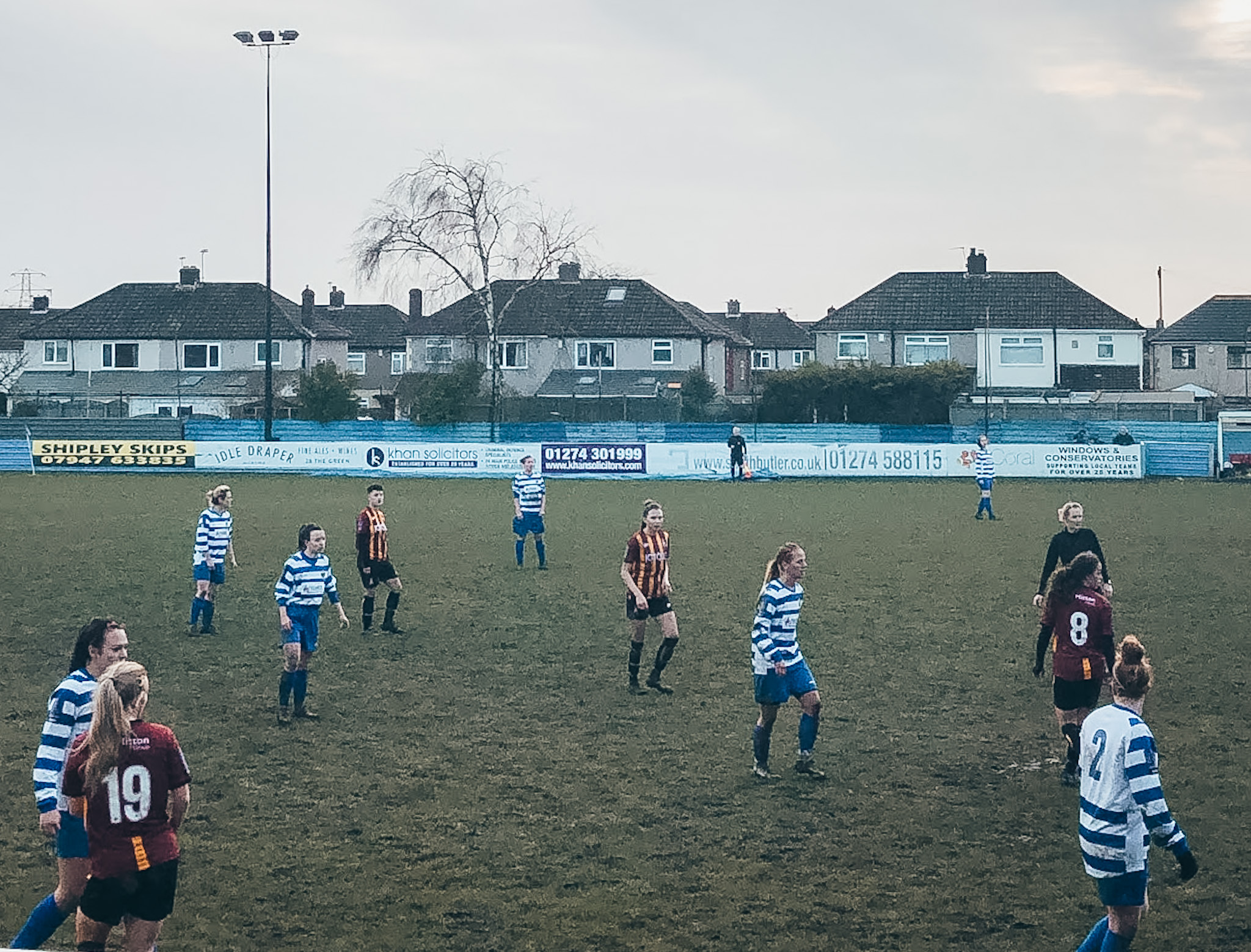 Finally after what feels like forever we managed to get down to the Mitton Group Stadium to see 12th place Bradford City Women take on 6th place Chester Le Street. It was a morning of checking our phones to make sure the game was going ahead as other games around the country were being postponed. Luckily Bradford’s fixture survived although the game was played on quite a boggy pitch which could cause issues for both teams, the pace of the ball and players runs was always bound to be affected.

As the teams came out for kick-off I was surprised to see no substitutes on the Bradford bench, meaning those 11 players out there needed to stay injury-free and try to manage their fitness for a full 90 minutes which with the condition of the pitch could have been an issue, however, City managed well and never looked like they were at a disadvantage with having no substitutes to call upon. This game was also a chance to see how the newly announced members of the coaching staff were going to affect the team and what difference they could make.

City were playing well right from the get-go, making some fantastic runs and moving the ball around well. They were even closing down the Chester Le Street defence and midfield really well, which I haven’t really seen them do for a while. Just the simple thing of closing down provided plenty of chances, City had their first chance of the game thanks to the closing downplay that they seem to have adapted too but unfortunately the ball ended up straight in the ‘keepers hands.

Chester Le Street did have a chance shortly after but the shot went over the bar, there was never any danger from it, as their effort to lob Routledge was always heading over. City’s movement with the ball had definitely improved too as they worked the ball well onto the wing and after two great crosses and a few scrappy clearances, the ball fell to Norde’s feet where her range shot ended up in the ‘keepers arms. Again this chance came from City putting Chester Le Street under pressure in the box as the clearance fell to another City player.

Chester Le Street looked to put in a dangerous cross not long after Norde’s shot but captain Roberts was there to clear the ball and stop it from falling at the Chester Le Street forwards feet who was unmarked coming in behind her. If they had made connection with the ball it would have possibly been a goal so Roberts helped City out there.

City were the team who got the breakthrough goal on the 26th minute when Stube slotted the ball into the back of the net to make it 1-0, the ball was worked really well around the pitch and the ball into Stube was practically perfect. It was great to see City go ahead in a league game and it seemed to lift the morale of the team too as not long after they forced a corner after a great ball through ended up with City beating the ‘keeper at an angle but unfortunately, a Chester Le Street player was there to make the clearance. City just kept piling on the pressure and finished the 1st half 1-0 up, which not only lifted their morale but the morale of the fans around the ground too.

City came out and started the 2nd half as strong as they ended the first, those outfield players were showing no signs of tiring just yet. When called upon the City team really dug in deep and they got back and defended well to keep on denying Chester Le Street, there was always a player there to help get the ball that bit further away from danger each time. There were a couple of occasions where Chester Le Street looked a threat but City’s defending & some great saves from Routledge kept the score at 1-0.

It wasn’t until Chester Le Street were awarded a penalty for a questionable foul in the box that City faced a serious threat. Routledge saved the initial penalty but Chester Le Street scored from the rebound to make it 1-1. City’s heads didn’t drop though as not long after Hunt scored a fantastic goal to put City back into the lead. Stube did well running down the left-wing, carrying on after a challenge to put in a brilliant cross that found Hunt perfectly. It really gave City an extra boost too but Chester Le Street started putting the pressure on again and although City were doing so well at getting rid of the ball the referee gave Chester Le Street yet another questionable penalty this time for a handball from Stuart. How it was called for a handball though I am still wondering, the way the ball bounced and hit Stuart’s arm really couldn’t have been helped & Stuart’s arm was in a natural position. Chester Le Street made no mistake and buried this penalty first time making the scoreline 2-2.

After the penalty, the tension that had been building all game ended up spilling over and Stuart ended up on the floor with a small scrap going on behind her, this ended with the Chester Le Street player picking up a yellow card for her involvement.

The game ended 2-2 and to be honest City should have been walking away from the game with all 3 points, not just the 1. The referee’s choices cost City the game and throughout led to the tension building minute by minute. Obvious calls weren’t being made and the referee wasn’t checking to see what the linesmen were flagging for, not only did it cause tension to build but it left both sets of players confused as they weren’t sure what was been called and what for, the standards of the refereeing need improving as it is now negatively impacting the games, but that is a topic for another day.

Even though City only walked away with a point today all 11 players should be walking away with their heads held high as they all fought the full 90 minutes and produced one of the best league performances I have seen from them this year. There has definitely been a big improvement in the team since the arrival of Chris & fingers crossed that it is only going to carry on improving game by game.

The game provided a few contenders for player of the match such as Routledge for her brilliant saves, Hunt for her goal and great runs or Norde for her great runs, clearances and challenges in midfield but the player of the match for us definitely has to go to Stube. She made some fantastic plays throughout the game, got back and put in some challenges & grabbed a great goal, Stube was involved in the build up of most of City’s chances and really stood out throughout the game.