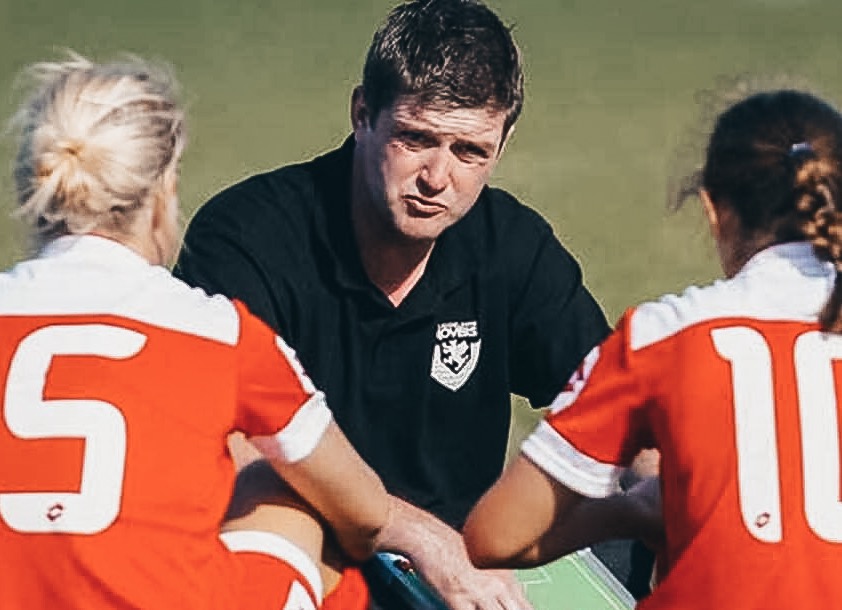 After a highly successful three year period for Bristol Academy that saw the club claim a runners up spot in the 2013 WSL and two Women’s FA Cup final appearances in 2011 and 2013, manager Mark Sampson left to coach the England Women’s team, Dave Edmondson was hired to replace him for the 2014 season, despite a disappointing 7th place in the WSL they famously reached the last 8 of the Women’s Champions League, knocking out footballing giants Barcelona along the way , I recently caught up Dave to talk about among other things those two historic games against Barcelona and his successful coaching career in Australia & New Zealand

Rich Paish: Please tell us how you got into women’s football management and your roles before you joined Bristol Academy WFC in 2014?
Dave Edmondson: I was coaching in New Zealand, men’s National League and applied for the NZ U17 women’s position in 2008, got to the last two and was told my lack of experience in the women’s game went against me in the final decision.

Following that, I started coaching Claudelands Rovers in the top domestic league in New Zealand alongside my men’s coaching and PE teaching at Hamilton Boys High School. Claudelands went on to win the NZ equivalent of the FA Cup in 2010, they also helped me get appointed to the NZ U17’s head coach position for the World Cup in 2010. Following the World Cup, NZ Football were delaying reappointment of National coaches due to organisational changes and an opportunity at Adelaide United in the Westfield W League came up through Alen Stajcic and Tom Sermanni. This was a combined role as head of women’s football in South Australia and head coach of the Adelaide United W League side.

After two seasons with Adelaide, I was approached by Football Victoria and Melbourne Victory to do the same roles in Melbourne. This was the 2013 season and Melbourne Victory won the W League with some great players like Jess Fishlock, Jess Samuelsson (Sweden), Steph Catley, Lisa de Vanna (Australia), Katie Hoyle (NZ) as well as some great young local talent! This success and discussions with former Bristol player, Jess Fishlock led to the Bristol job.

What were your memories of the 2014 season domestically?
A frustrating season to some extent, developing a new more proactive playing style based around possession football that produced some lovely football without always getting the results we maybe deserved. A great win against Arsenal at Arsenal, two good wins against Man City, a big win over Everton at home were obvious highlights. We then were I think two up at home over Arsenal but lost 3-2 after Kelly Smith inspired an impressive Arsenal comeback! I think we missed two penalties away to Everton in a 1-1 draw and almost every other game we were super competitive!

The home game against Notts we were so dominant and then fell to two freak goals against the run of play but although we finished 7th going into the last day we could still have made the top 3 from memory!

Having come into the position late and having being hamstrung with recruitment selections, I felt we had quite a positive season, obviously helped by the UWCL run!

The women’s Champions League began with a comfortable 6-1 aggregate victory over Ireland’s Raheny United in October 2014, next up was Barcelona in the last 16 the following month, please tell us what you remember about that remarkable 1-0 away win in the first leg?
The away leg was interesting as we suddenly had distractions of board members and club representatives who we had barely seen before wanting to be in the hotel and on the team bus etc. But the coaching staff and players were fantastic, so focussed and so professional in their approach to the game. We knew we would have to play quite a defensive and counter-attacking game plan but we trained for a good couple of weeks specifically for that and the players implemented the plan perfectly. The away goal was obviously huge but the clean sheet I think also gave the players real belief in what we were trying to do!

Five days later Bristol Academy hosted Barcelona in the 2nd leg, what were your memories of that historic night at Ashton Gate as The Vixens reached the quarterfinals?
It’s tough to remember everything as I was probably the most vocal id ever been in that game and the most ‘directive’ from the sideline out of necessity. I normally prefer to have done my coaching during the week and allow players to play without too much continual direction from the sideline but Barcelona were so impressive I had to really help the players out throughout the game with dealing with Barcelona’s movement and rotations. I do remember being so angry at the free-kick decision against Jas Mathews that led to the deflected free-kick goal that tied up the game.

I remember the influence Laura del Rio made when she came on, running at defenders, I think hitting the crossbar from about 40 yds? I remember Tash(Harding) winning the penalty and Wattsy (Nikki Watts) scoring it under so much pressure! Then obviously the last 5/10 minutes seemed to go in forever as Barcelona threw everything at us.

At the end of the game, I remember the jubilation and positivity around the club and the supporters! Seeing so many of the younger Bristol Academy players at the game too was massive!

Your tenure as Vixens manager ended in April the following year following a heavy defeat by Frankfurt in the UWCL and losing your first 3 WSL games, what were your thoughts on those final few games & do you feel you should have been given more time?
I totally think I should have been given more time. I’m convinced we would not have been relegated if I’d stayed at the club. We lost some key players at the end of the previous season due to big changes in the league financially and we had to develop a slightly different playing style again to suit the players we did have and that was tough especially having the two Frankfurt games first up. I had one discussion with the general manager before the sacking and the board were under the impression that Sunderland would be the team most likely to be relegated, although I felt Liverpool and Birmingham would be more likely to be the games we would need to win to stay up.

I think then losing to Sunderland 2-1 in a game where we created enough chances to win three games was a big factor in the board’s decision. Frustrating as none of them were at the game and didn’t see the performance we put in. It was frustrating as in the off season in regards to recruitment, Id looked at and contacted players like Vivianne Miedema, Tessa Wullaert and Sari Van Veenendal who have gone on to star in the FAWSL but for varying reasons, we couldn’t sign any of them.

The start to the season was from memory were Chelsea, Arsenal and Sunderland. We struggled against Chelsea but were competitive against Arsenal. We should have won or at very least got a point from the Sunderland game but the players were working hard and I think believing in what we were trying to do.

What have you been doing since you left the Vixens?
Since the Vixens, I did another season with Melbourne Victory where we had to rebuild a team after the newly formed Melbourne City took a number of my championship-winning side from two seasons previous. I signed Tash Dowie to bolster a very young side of local players. Tash has stayed at the club since and done really well, winning the league last season and competing in the Asian Champions League this season. After that I coached London Bees in FAWSL 2, turning them into a really competitive side after some very difficult seasons in the league. The highlight being reaching the semi-finals of the Continental Cup, beating Chelsea along the way. I left London Bees in 2017 initially to return to New Zealand but then to move to Switzerland due to my wife’s work.

I am currently a stay at home dad to our 2-year-old daughter, completing my Masters in Sports Directorship through Manchester Metropolitan University and acting as a Football consultant, offering advice on football conditioning, leadership and general coaching.

What are your thoughts on the women’s game in England now, in particular, the WSL and the current Bristol City WFC team?
The game is currently going through a real boom which is fantastic in terms of the media coverage and numbers attending games etc. I still find it disappointing the reactions from ‘men’ on social media to the game and women’s sport in general. NZ and Australia are light years ahead in their readiness to accept and support women’s sport, seen by the way Australia has taken to the Matilda’s!

I fear the women’s game may also go the way of the men’s game with so many international players dominating the league to the detriment of the national side. Having the best players in the league is great and helps the English players develop but limit the numbers somehow. One or two clubs have come very close to naming sides without a single English player.

As for the current Bristol side, I know Tanya from her time in Australia and we spoke when she was appointed. There are a couple of players left from my time there but not many now. They look like a young side who are growing into the league. I hope they can put aside some of the big defeats they have had and focus on the games against their closest rivals in the league table. With the greater involvement of Bristol City and Bristol Sport, I hope they will start to be able to keep hold of some of the good younger players at the club instead of them moving on so quickly as has been seen in the last couple of seasons.

There were some great hard-working people at the club when I was there and I will always have a soft spot for the club as it gave me some great footballing moments as well as the not so great ones, so I always wish them well.