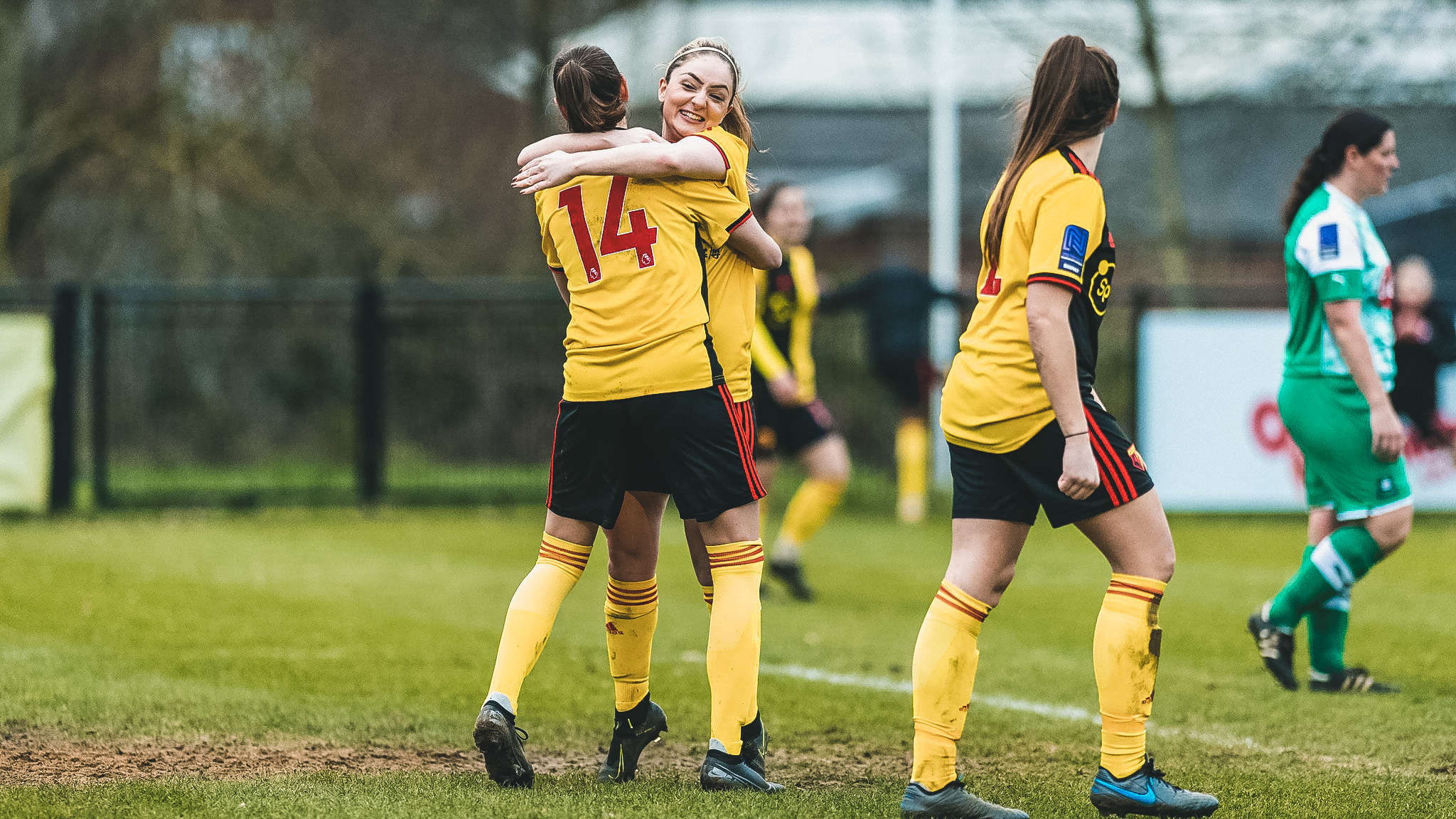 06 Jan, 2020
Posted at 23:07h in Match Report, Women’s FA Cup by David Quick
A few days after a classic match at Home Park, in which Watford defeated Plymouth by five goals to four, the two sides learnt that they would face each other in the 3rd Round of The FA Cup.
An earlier kick-off than usual for The Golden Girls, kick-offs at Kings Langley are pushed back to 3 pm, rather than 2 pm due to Youth Team games being played on the site in the morning, meaning parking can be a pain. So me and Lindsay had an early lunch and left just after 11 am, for a mid-day meet up.
The 1st game of the year for Watford so the usual greetings with the added Happy New Year with the other volunteers and club staff.
Lindsay jumped in the turnstile with Sam, as usual, something she’s been looking forward to all week. I met the opposition, who turned up in a minibus, a very early start for them, spoke to their keeper Benjamin Kyle who said they had left before 7 but had a good stop at a service station for coffee.
Ocean Rolandsen’s Mum showed up not for the first time with loads of cakes that she made for the spectators and players, so Paul Kiff aka Steps (he never fell down any this week!) and I set up a table for them to go on.
Whilst the two teams were warming up I went on the hunt for some youngsters to be mascots for the day. Had plenty of volunteers. One lucky young boy, Bradley led the Hornets out whilst carrying the match ball, as it was his seventh birthday.
Watford General Manager Grace Williams presented Head Coach Clint Lancaster his Award as FA Women’s National League Manager of the Month before kick-off, a well-deserved award for Clint and his team.
Watford made a few changes, but the squad was the same that went to Home Park in their last game, Plymouth had to make a few changes, due to injuries and losing midfielder Jessie Jone whose moved overseas.
Watford started brightly, Keeper Ben Kyle making some good stops from Watford skipper Helen Ward. Helen looked very dangerous, beating the offside trap to just put the ball wide midway through the half.
On 29 minutes the deadlock was broken, Ocean beat her defender down the right-hand side, put a cross into the far post for Katie ‘Leggy’ O’Leary to force home.
Plymouth reacted positively, Zoe Cunningham rattling the host’s crossbar! But just as Plymouth were getting into the game, The Golden Girls countered, Helen Ward drove at the defence, threading a ball through to Leggy who tucked it home at the near post to make it 2-0 on 36 minutes. On the stroke of half time, Midfielder Alysha Stojko-Down had a strike cleared by Katie Middleton.
Half Time and it was time to get all the kids on the pitch for some penalties, always great fun. This week I got saved from going in goal, Plymouth substitute Helen Bleazard offered to go in goal. She was great with the youngsters, giving the next generation a great time!
Watford started the second half with a third goal, Spanish Sensation, Andrea Carid beat a couple of defenders down the right-hand side, dinking a cross into the unmarked Leggy who couldn’t miss, getting a well-deserved hat-trick goal.
Faye Ivall had a good effort for The Pilgrims, Keeper Chrissie Wiggins holding onto it well.
There was a long stoppage of play after a collision between Wiggins and Natasha Knapman, calls of Penalty from the Girls in Green, not given. Both girls played on, Knapman only for a few minutes, having to come off with a dead leg.
Wardie then came close again, firing over from a cross by the excellent Ocean Rolandsen.
A minute later and Wardie was denied again, one on one with Plymouth’s excellent Keeper Kyle.
Finally, in the 5th minute of Injury Time, Helen got her deserved goal. Emma Beckett launched an early free-kick from deep within Watford’s half, setting Helen free, she shrugged off the defender and this time stuck it in the onion bag.
It wasn’t over though, 2 minutes later it was 5, Substitute Danielle Scanlon turned 25 yards out, had a touch and struck it over Kyle to book a place in the 4th round.
After the game, the best part of the day for me, all the kids back on the pitch, sharpies out and autographs with the players and pictures. Lots of happy kids.
The Watford fans applauded the Plymouth girls off the pitch and wished them the best of luck for the season.
The Watford Ladies Fan Group did some interviews with Manager Clint Lancaster and Hat-trick hero Leggy.
There was some good news as well, the attendance record for The Golden Girls at Kings Langley FC was broken, getting 200 for the 1st time!
So either Fylde or Sunderland away in the next round, a long journey whichever side, but these girls will be up for it. But before that, The Golden Girls have a home tie with Portsmouth next week. If anyone is interested, its £6 adults, £3 concessions, £1 Under 18’s and Watford FC Season Ticket Holders get in half price.
Photo by Andrew Waller Images